Thunder returned to winning ways in style with a 66-39 victory over Celtic Dragons at Studio 001. Following a tough weekend with two losses Thunder were in need of a confidence boost and were given just that with the win and a great performance.

Head coach Karen Greig mixed up the starting seven with one enforced change with captain Emma Dovey sitting the game out as a precaution after being injured against Team Bath last weekend. Rebekah Airey filled the vacant goal defence position while Caroline O’Hanlon was reinstalled in the more familiar centre position with Amy Carter moving back into wing defence.

Celtic Dragons, following some criticism through the week came out firing and out to prove their worth which reflected in the equal score throughout the first quarter. Thunder took time to settle, the links in attack looked strong however, they struggled to turn over ball.

Thunder started to form a pattern from Caroline O’Hanlon’s centre pass to Malcolm on the wing to Mvula waiting in the circle, which set a neat precedence and following a late turnover, Thunder managed to obtain a 3-goal lead ending the Quarter 17 – 14.

Greig tweaked her team for the second quarter bringing on Alicia Scholes at wing attack with captain for the day Malcolm moving to wing defence.

Scholes made an instant impact with her speed and an eye for a pass into Mvula who looked comfortable in the circle and was not even slightly phased by any pressure the Dragons defence tried to put on her. Scholes’s pace worked well with O’Hanlon in centre and they showed great understanding and brought much needed speed and confidence to the Thunder attack.

With some great interceptions from goal keeper Kerry Almond and Airey, those turnovers were feeding Thunder’s hungry attack. Cardwell and Mvula were under less pressure and had the freedom to show their talents in the circle. In the 12 minutes of quarter two, Thunder scored a game-changing 19 goals and only allowed Dragons to score four, making the score at half time 36 -18.

Captain Laura Malcolm said “It took us time to get settled but once we did, we really got into it. It was a good second quarter for us. Karen will be happy, at the end of the day we didn’t answer questions last week and we got asked a question then and we answered it.”

The Thunder pressure continued into Quarter 3, bringing on youngsters Elia Standring and Lois Pearson to add to the speed and pace. Scholes continues to continue the family tradition chasing down the ball and being nippy all over the court whilst keeping the Thunder vision.

It was not just the younger players who had the pace; O’Hanlon seemed to be covering the court in a blink of an eye and as a result, the speed flustered Celtic Dragons, allowing Pearson to subtly take the game by the scruff of the neck and continue the fast flow of goals. Dragons seemed to feel the game slipping away from them so gave one last burst of energy which found Mvula to be sandwiched between their defence. Luckily, this left Pearson free to do as she pleased and confidently score a few more goals before the whistle, ending quarter 3 at 52 – 27.

Surprisingly, Celtic Dragons made no changes, contrasting from Thunder whose changes saw that all 12 Thunder players had been on court. The youngsters continued to establish their dominance with players such as Scholes having a super strong game with Scholes’ and O’Hanlon’s long bombs making it nearly impossible for Dragons to defend. The goals continue to tot up to allow the final score to be a massive 69 – 33, with Mvula scoring a solid 47 of those.

Head Coach Karen Greig said “We started a little bit slow, our intensity in defence definitely wasn’t there. We wanted to come out hard and put pressure on early but we didn’t quite do that in our defence line so we had to just tighten it up and inject a bit of pace into the attacking end and I think it was all guns firing from there. It’s important when making changes, you know why you’re making changes, it’s not just about giving people court-time, it’s looking at combinations that are purposeful. For us, getting Liss out there, and to give her a solid 3 quarters, I think she injected that pace that we needed into attack and she’s fearless on the feed which really helped Joyce out. Then you look at Elia in the back at goal keeper, she came on at half-time and I thought she was phenomenal. Totally fearless, was putting that pressure on winning ball and forcing errors. They’re all doing a great job think all five of those youngsters are doing themselves proud and throwing their hands up for selection. After the training week that we had, I think it is key we had that kind of win and to get people on court in purposeful combinations and to get them playing with that intensity and belief that we can play like that. Ultimately, yes we did have a tough weekend last weekend and we lost 2 games but the year that we won the title we lost five so we’re not too downhearted, we know we had a bad week and we’ve looked at how we can put that right next time so we’re a long way off semis and finals yet, we’ve just got to make sure we’re on the ball between now and then.” 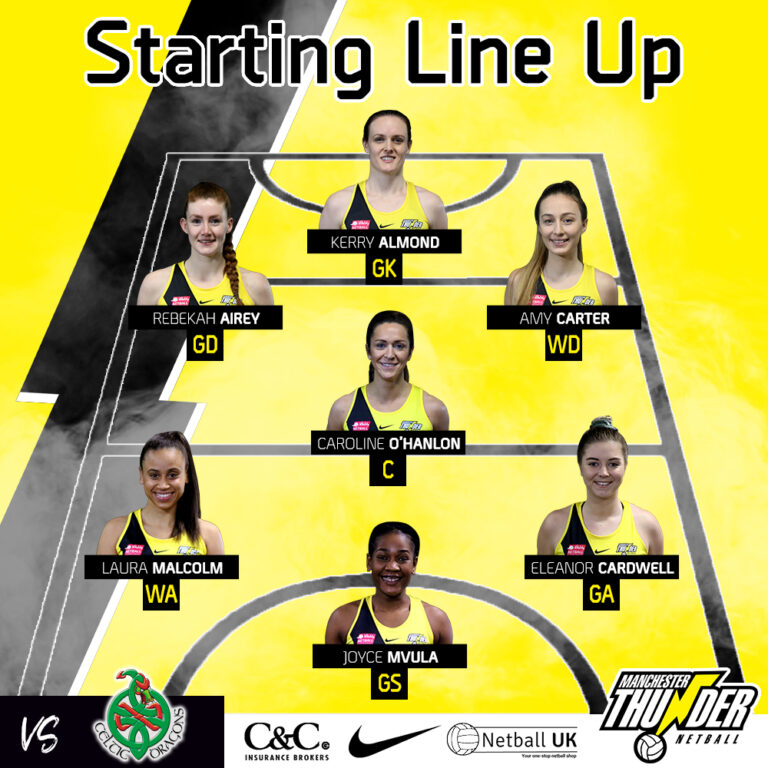 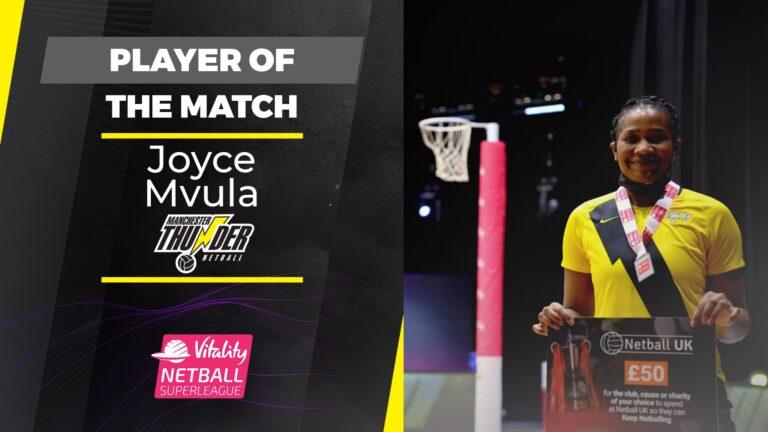 A pleased Mvula commented that they “We played very well. We had a bad week last week. It’s good we went for training and I just thank my prayers, I couldn’t have done it myself, it’s teamwork. We have to be growing together, everyone has to have the opportunity to come into the court. Anything can happen, especially with covid, what ifs cause anything to happen so we have to be on the same level. We just have to push again, where we’re going is harder so we just have to keep on pushing.” 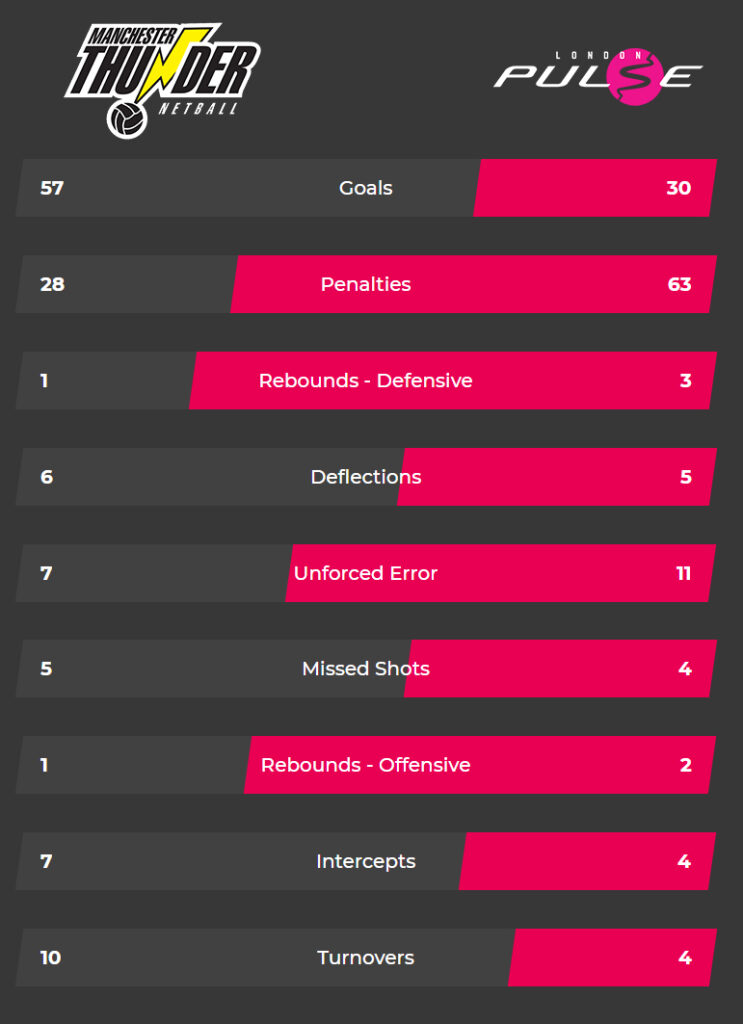