Despite it being Easter Sunday, Thunder knew this game was no yolk! Their last coming together with Loughborough Lightning, Thunder’s only home game of last season, saw a narrow score line of 67 – 64, so Thunder knew they had a tough game on their hands coming into the double header this weekend.

End-to-end action became the theme for the whole game, which was to be expected following previous face-offs. With Lightning only having one loss to Bath since the 2021 season began, Thunder needed to pull something out the bag. Lightning held on until the very last quarter however Thunder struck and managed to scrape through with a convincing 59 – 50 win.

The unpredictable starting 7 looked strong, with Caroline O’Hanlon on Wing Attack and Laura Malcolm on Wing Defence with the usual Kerry Almond standing up to Lightning’s 6”7 shooter Mary Cholhok who has scored nearly 300 goals in her 8 appearances. Co-captain Laura Malcolm once again stood as captain whilst Emma Dovey recovers from her ankle injury.

Before the game, Head Coach Karen Greig was asked about why Thunder are wearing black armbands. She said, “Sadly this week we lost one of our volunteers, Anne Heyward. She’s been part of our volunteering family for over 10 years now with her daughter Laura and husband Steve. Unfortunately on Friday we lost her after a battle with a long illness. So really, really sad, but hopefully the girls will do her proud.”

Thunder opened the game with a goal but, as expected, Lightning followed up by equalising. Loughborough managed to break away after converting a couple of turnovers, but with Joyce Mvula managing to sneak a goal in just before the whistle was blown, quarter 1 ended on a nail-biting 15 – 14 to Lightning.

Thunder came out with all the energy and effort they could muster in quarter 2, predominantly tightening up the defence but this wasn’t enough to stop Lightning stretch ahead with a 4 goal lead. A switch then flicked for Thunder, as they pulled back the score to equalise before continuing to overtake by forcing Lightning to make errors. With Almond sussing out Cholhok, she made some great interceptions, stopping a few crucial goals. This raised some questions for Lightning, who could feel the tides turn, and as half time approached, a wider gap was appearing in the score line. Pressure was also being put on Loughborough’s centre third thanks to O’Hanlon’s perfectly aimed passes. Momentum saw the reigning champions score 17 goals in quarter 2 to Lightning’s 11, giving a more convincing 5 goal lead to Thunder at 31 – 26 at mid-point in the game.

At half time, Captain Laura Malcolm commented, “We need to convert our turnovers, we were getting turn overs for the first quarter but we weren’t taking it down to goal. So it’s just that in second quarter we managed to convert a few more and it helped.”

Entering quarter 3, Loughborough Lightning increased their pace with some player changes to chase the lead Thunder obtained in quarter 2. Lightning continued to try and expose Thunder’s weaknesses, doing everything they could to try and get the ball to Cholhok. With end to end play with the smallest of errors from each side, Lightning managed to catch up on Thunder’s lead. A smiling Eleanor Cardwell kept her composure and calm head amongst the madness, setting the tone for the rest of the team. Quarter 3 ended with a sliver of a goal difference at 42 – 41 to Thunder.

Quarter 4 was all to play for. O’Hanlon continued setting up some great goals with key passes finding the right players. The lack of changes to the team enhanced Karen Greig’s confidence in trusting the process and as a result, the confidence shined through in Thunder’s players as execution in the attacking third showed nothing but strength and determination. Thunder managed to hold onto a 6-goal lead throughout most of quarter 4, largely due to every Thunder player excelling in their area. A combination of Almond’s play against Cholhok, Malcolm’s footspeed, O’Hanlon’s amazing set ups and both Cardwell and Mvula’s precision shooting all managed to seal the deal for Thunder, finishing the game on 59 – 50. 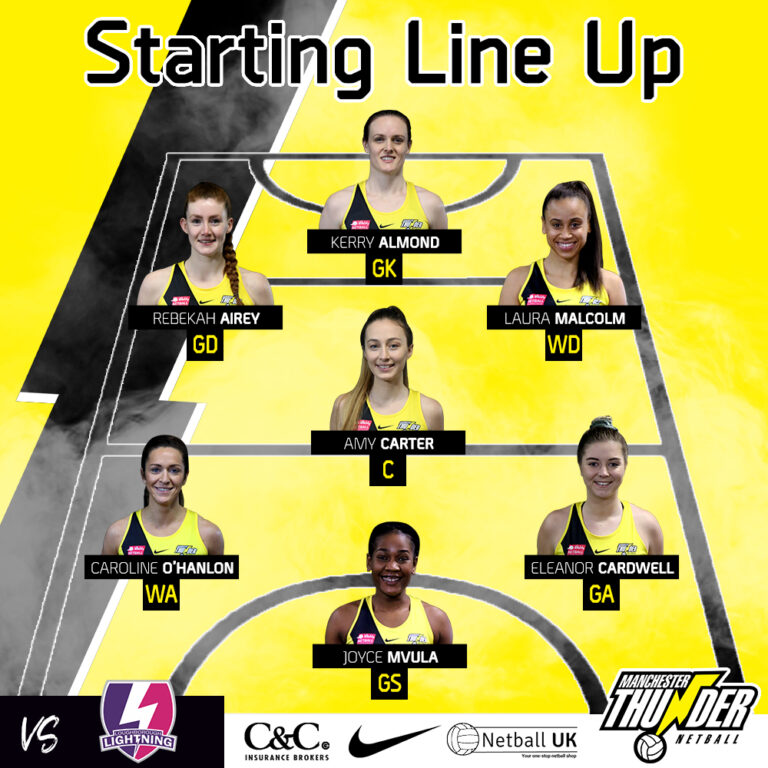 “I’d like to donate the voucher to my home club Larkfield Netball Club. They’ve been so important to me over the years, developing me as a player and supporting on and off the court. I wouldn’t be where I am today without them.” 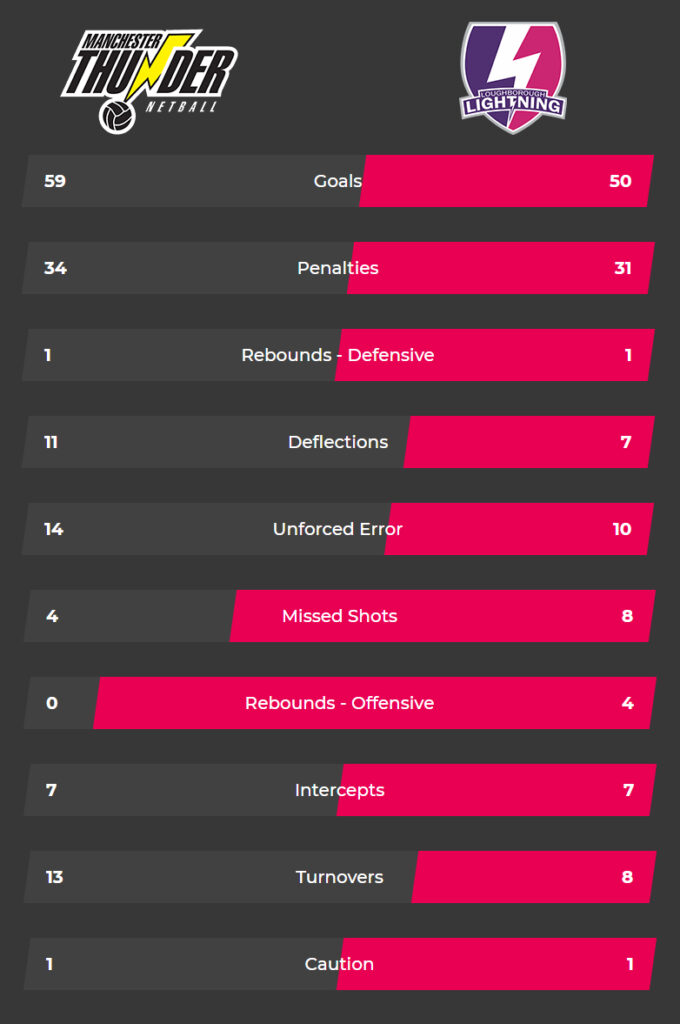