The last match in Wakefield was as hyped as any roses derby game with Rhinos confident following the return of star shooter Donnell Wallam and defender Fi Toner from injury. It was all on the line for both teams with Thunder on a roll and hoping to maintain a top 3 spot, while Rhinos needed the victory to keep alive their chances of a top four finish. Styling it out in purple for the first time this season it was Thunder who crashed the parade and came out convincing victors in a 47-66 win at Production Park Studios.

Head Coach Karen Greig said in her pre-match interview: “You look at performance analysis before you start any game and obviously last time we played them, they’ve got a completely different attacking end to what they’ll have tonight. It’s about stopping them early, they’re not afraid of putting in that early ball so we’re going to have to focus on shutting down first phase. We have to clinical in attack and we have to go hard in defence.”

Thunder’s starting seven were given a run for their money when Rhinos came out as strong as anticipated, matching everything Thunder were putting on the table. Déjà vu set in when Leeds Rhinos kept a level playing field throughout most of quarter one.  Donnell Wallam’s experience asked questions of Thunder’s defence in how they were going to play her and disrupt her game however, Eleanor Cardwell managed to get away from Rhino’s defence and put five straight goals in the net which saw the first quarter finish on a score of 15 – 11 to Thunder.

Quarter two saw Thunder really put the defensive pressure on that head coach Karen was asking for. Kerry Almond made some important interceptions which slowed down Rhinos in their responding charge. Defending from Rebekah Airey forced Leeds into making those extra few passes and disrupted their passage of play. This allowed Thunder’s attack to take control as Caroline O’Hanlon dictated play with possibly her best display to date at wing attack, with Thunder heading into half time with a 10-goal lead at 20-30.

At half time, captain Laura Malcolm commented: “It’s about playing smart. We talked about grit a lot in the last one but actually, playing with smarts helps us quite a bit. So just trying to calm down and really see the options in front of us and let the ball go.”

A self-assured Thunder team emerged after half time with an extra gear to up the ante against Rhinos and put the game to bed. Joyce Mvula continued to slot in the goals, even when the post was knocked, and the Malawi Queen had a moving target. Thunder seemed to just be letting the chaos ensue whilst playing their own tactful game plan. Amy Carter was playing with assertiveness and vision, as though she is well beyond her years, consistently landing on target and confidently willing to make both long and short play, which again, did not give Rhino’s enough chance to keep up. Thunder’s pressure on Leeds caused uncharacteristic mistakes, even from Donnell Wallam who consequently missed a couple of goals. Thunder really put their foot down and gained a strong lead of 19 goals, with a score line of 49 – 30.

The fourth quarter saw some great play from Joyce Mvula who made shots from way out the circle to being thrown to the floor and jumping up with a smile. It was difficult to pick a player of the match with most players putting their hands up for it with their performances. Thunder were relentlessly and came away with a convincing win of 47-66, moving the black and yellows to third in the table. 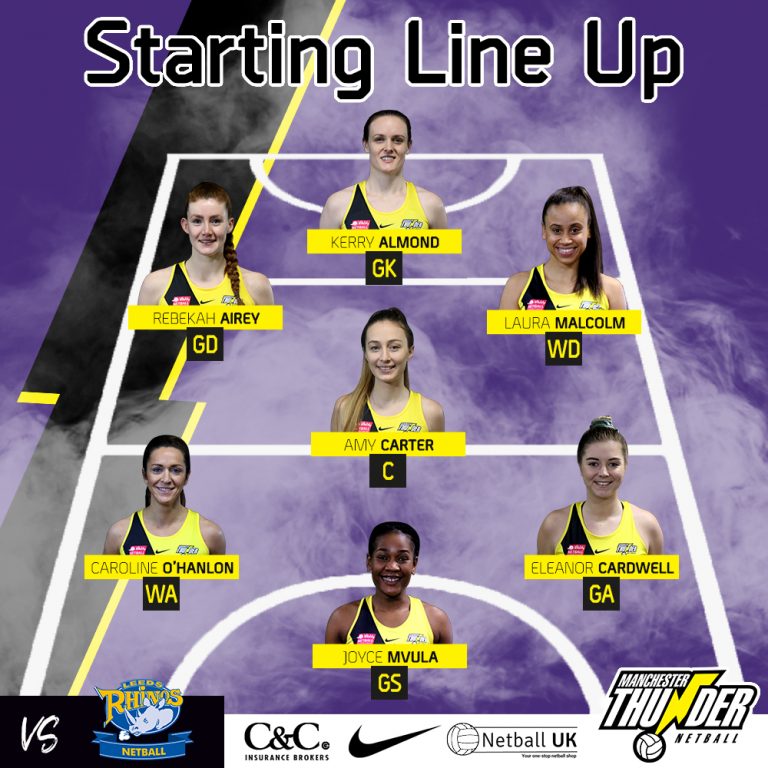 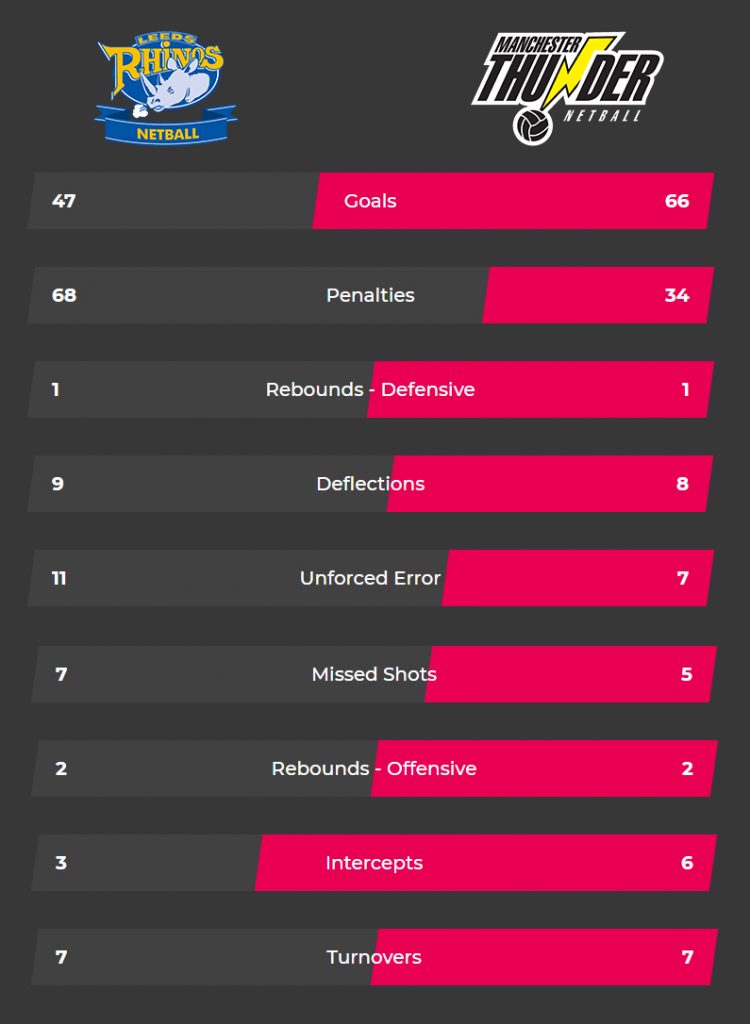