A deadly performance from Manchester Thunder in the last game of the season sealed a win against Strathclyde Sirens with a 64 – 37 win.

The black and yellow’s faultless display gave the Scots a shock, not giving them an inch to try and catch up. From returning Amy Carter’s first centre pass, Thunder went out all guns blazing and continued the pace until the final whistle.

A lot has changed since when Thunder last went head to head with Sirens in round one but one thing was for certain, Thunder’s well known hustle has always shone throughout the season and today’s game was no different. Captain Emma Dovey was covering all corners of the court but every player applied Head Coach Karen Greig’s cool, calm and collected approach which has seen success throughout the 2021 season.

Thanks to Thunder’s ‘B of the Bang’ start, Sirens found themselves on the back foot throughout. Thunder’s Malawian queen Joyce Mvula was ruthless with her scoring despite Siren’s keeper, fellow Malawi Towera Vinkhumbo’s best efforts. Mvula has scored a mindblowing 650 goals in the 20 game season, a stat that awards her as the Vitality Netball Superleague’s second highest goal scorer behind Loughborough Lightning’s Mary Cholhok.

As quarter three drew to a close, the young guns were brought on to both add to their court time and to rest the legs of the more experienced players, ready for Thunder’s finals weekend. They continued to tot up the goals to give the mancunian side a 27 goal lead over their Scottish counterparts, more than could be said for the recent Euros draw between England and Scotland. 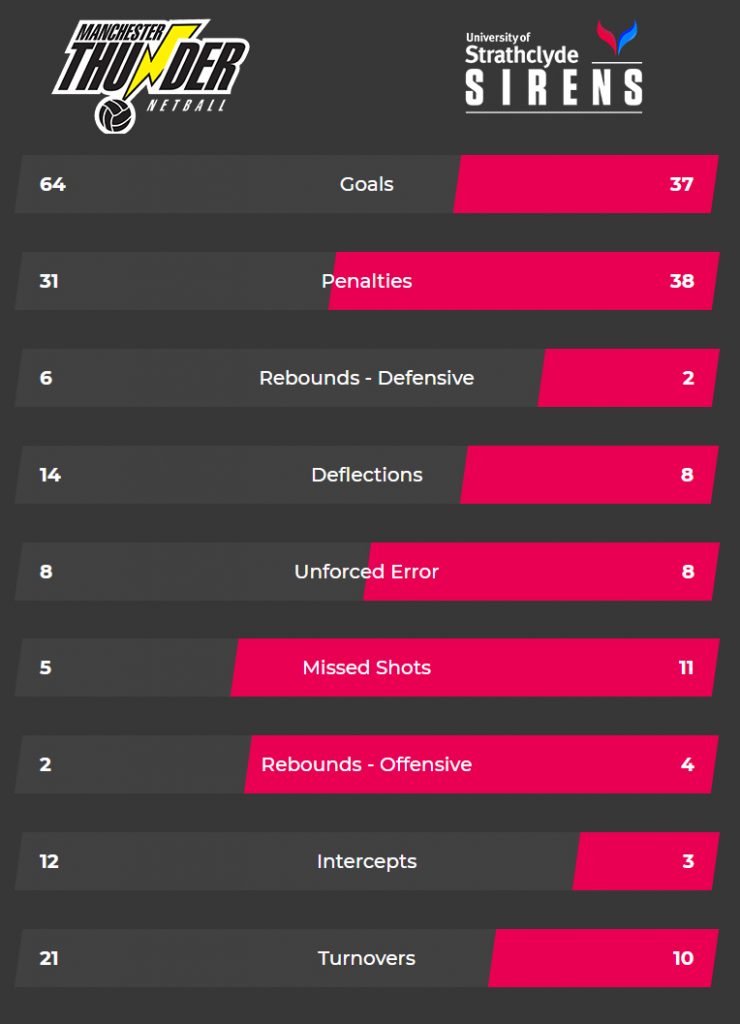