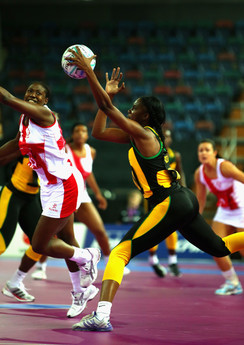 Manchester Thunder have made their final big name signing ahead of the 2016 Vitality Netball Superleague.

Jamaican defender Malysha ‘Mally’ Kelly will join up with the Black and Yellows as the team’s second import player. Kelly comes to England after recovering from a knee injury, which ruled her out of this summer’s World Cup in Sydney. The experienced Jamaican defender played an integral role in the Sunshine Girls claiming bronze at the Glasgow Commonwealth Games and captained the national side during their tour to England in 2014

Discussing why she chose Thunder, the business school graduate, who waited until she had finished her studies to dedicate time to playing overseas in the Superleague, said: “Thunder struck me as a diverse group, which I found very interesting and I have always enjoyed my time in Manchester whenever I visited. About two years ago my interest in playing in the UK league evolved. My entire netball career I have been studying so this is the first time just I’m just focusing on netball. I’m very excited.”

The 6ft 1 player, who also competed in the 2011 World Cup in Singapore, is looking forward to ‘inspiring others’ on court. “I’m feeling elated about moving to Manchester, I’m sure I’ll get used to the weather!” added the 26-year-old, who has 54 international caps to her name. She joins fellow overseas star, Silver Ferns mid-courter Liana Leota, at Thunder.

Kelly completes what appears to be shrewd business by new coach Dan Ryan, with the Australian also securing young England Goal Attack, Natalie Haythornthwaite in his squad. Ryan said: “Malysha’s a proven talent with a lot of experience on the world stage and I’m really excited by the opportunity to coach her. She is so unpredictable, athletic and very tenacious so she’s certainly going to add further depth and diversity to our strong defensive options next season. “

The 31-year-old admits he has been tracking his new signing’s career for some time and is ‘thrilled’ to have her on board. The former Adelaide Thunderbirds assistant coach added: “I think there is so much untapped potential in her. I‘ve always enjoyed watching the flair and fire that the Jamaicans compete with so I’m really eager to see Malysha’s overall game develop in the Thunder environment. “